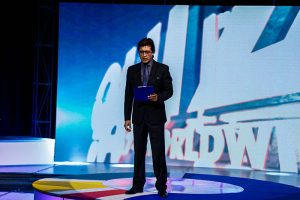 “Quiz Mania”, is a quiz contest as a way of influencing and nurturing a culture of knowledge among the global population and end-goal of world development. Quiz Mania is the flagship venture of the Accretive Media Pvt Ltd. Embarked on the journey 7 years ago at the national level by gathering eager students from across Nepal and pitting their knowledge base amongst one another.The organizer took a broad sweep across many cities and schools across the nation in the year 2012 and extended to South Asia in 2016, continuing this growth to sieve the hidden talent lurking within the entire continent and further expanded to Asian level in 2017, with teams representing all parts of Asia.

Summary of the Show

The Accretive Media Pvt. Ltd Family embarked on a journey seven (7) years ago with our flagship show “Quiz Mania” as a way of influencing and nurturing a culture of knowledge and learning in the populace with an end-goal of national development.

Having successfully organized the Asian level contest of the show in Nepal in the year 2017/18, we were able to add the multi-cultural diversity in the show with the participation of nineteen (19) teams from various Asian countries.

This year, we, the Accretive Media Pvt. Ltd would like to propose Season 7 of Quiz Mania. We hope this will provide the national and international students an opportunity not only to compete on an intellectual level but also advance the learning behavior through sharing of knowledge, culture and friendship.

With our previous six seasons, we have managed to attain quite an image within our viewers and have gained 5 million average viewers on Kantipur HD Television, which is a leading television station in Nepal. Along with this prominent mark on the television scene, the show has been widely-reached to a larger audience (at national and international level) through our official YouTube channel as well.